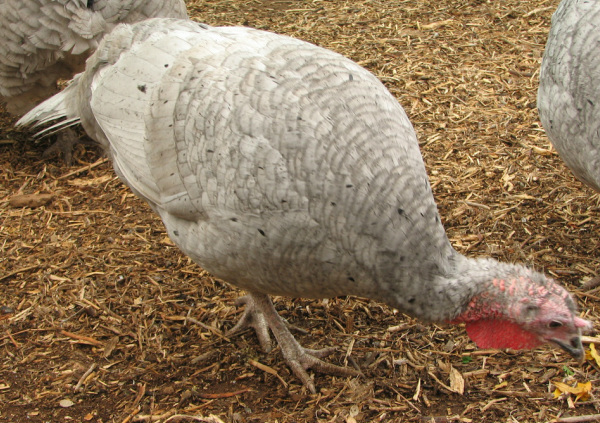 Mature Slate hen
The Slate turkey was one of the first varieties to be admitted to the American Poultry Association Standard, in 1874. The feathers are a slaty or ashy blue, and may be dotted with black. When breeding Slate to Slate, 3 colors are produced: Slate (50%), Lavender or Self Blue (25%), and Black (25%). I do not keep a Slate tom, preferring to use a Lavender or Self Blue tom over Slate and Lavender hens to avoid getting the black color. Breeding Slate to Lavender produces 50% of each color.

Due to the death of my Self Blue tom in 2017, I will be using a Barred Black over my Slate and Self Blue hens in 2018. A percentage of pure Slate will result and can be told apart from the poults carrying the b or bronze gene.